You are here: Home / Uncategorized / Bloodwalker by Lexa Cain: Just in Time for Halloween
Anyone who knows me knows, I love Halloween. It’s my favorite holiday of the year. So having L.X. Cain here this month with her new book is a real treat. I’m so looking forward to opening that cover and diving into the horror that the cover promises.
Take it away, Lexa!
New Release!
BLOODWALKER by L.X. Cain 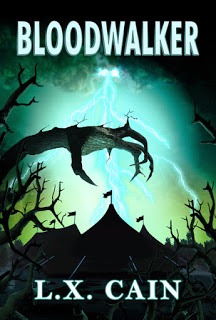 Lightning flashes. Another child disappears…
When Zorka Circus performs, its big top roars with laughter and cheers, but when it moves on, there are fewer children in the European towns it leaves behind.
Circus Security Chief Rurik suspects a killer hides among the international performers, but they close ranks—they’ve always viewed lightning-scarred Rurik as the monster. Nevertheless, he’s determined to find the culprit and stop them before anyone else dies and the only place he can call home is ripped apart by the murders.
Into Zorka Circus comes the Skomori clan, despised as gravediggers and ghoulish bloodwalkers. A one-day truce allows bloodwalker Sylvie to marry. Instead, she finds a body. Alerting others will defy her clan’s strict rules, break the truce, and leave her an outcast.
When more bodies turn up, the killer’s trail becomes impossible to ignore. Rurik and Sylvie must follow the clues—even if they lead to something unimaginable.
“YA horror novelist Cain (Soul Cutter) steps right up to the center ring in this captivating shocker of children disappearing after the circus comes to town.” ~ Publishers Weekly
BUY Bloodwalker
Amazon . Amazon (Kindle) . Amazon UK . Barnes & Noble
Kobo . BAM . Dancing Lemur Press
L.X. Cain was born in the U.S. but now lives on the Red Sea and busily taps away at a laptop, coming up with stories to thrill and entertain readers.
Contact L.X. Cain
Blog . Facebook . Twitter
There’s still time to write a bit of Halloween horror yourself on the WEP for October. That or something about Constellations. Sign up and Trick or Treat us with your prose! I’m feeling very smug because I’ve already done MINE.

Quote of the Week: “Your whole life passes in front of your eyes before you die. This is called living.” Terry Pratchett, author