You are here: Home / Uncategorized / Celebrating All Kinds of Things Bookish & Steampunkish

Hi and Happy Friday, but wasn’t it Friday just yesterday? And wasn’t January the day before that?

If I’m to celebrate anything it has to be my good bloggy friends who stop by and entertain me with their comments. So that’s who I’m celebrating today. No small thing, of course, but very important.

Maybe there’s one small thing I can add. A good night’s sleep last night. My characters snoozed from the workout I gave them the other day, so I got to snooze, too.

Now here are some authors who didn’t take that sage advice, “Write what you know.” And aren’t we glad they didn’t! Look at what they’ve come up with. 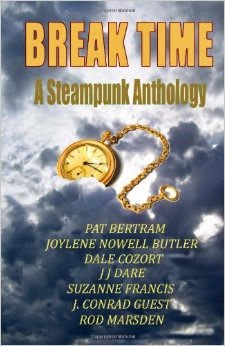 WRITE WHAT YOU KNOW

By
joylene nowell butler
Two years ago, author Pat Bertram asked if I’d like to collaborate with her and 8 others on a steampunk mystery.
Because it was Pat asking, I said, “Sure.”
Problem: I’d never heard the term — steampunk.
Wiki’s definition:
Steampunk is a sub-genre of science fiction that typically features steam-powered machinery, especially in a setting inspired by industrialized Western civilization during the 19th century….[etc., etc.]
To give you a better understanding, here are short list of steampunk movies:
Hellboy
Sherlock Holmes
The Time Machine
Van Helsing
The Brothers Grimm
The League of Extraordinary Gentleman
Warning: if you have to Google your intended genre, you might be in a wee bit of trouble.
Hence the reason it took two years to complete the project, none of us knew what we were doing. Well, three did, but they dropped out within the first year. The rest of us debated every six months or so whether we should quit.
It was tough going. I know there were moments when I wanted to shout, “I give up!” Why I didn’t was strictly stubbornness. I hate giving up.
Still, I suffered. I pulled chunks of hair out of my head trying to determine what motivated our antagonist. I eventually figured out what my character, Dakota David’s motivation was. Like me he was confused most days. I knew I could work with that. But when it came to incorporating his story with the novel’s lead character, I was completely in the dark. Had it not been for the patience of Pat Bertram, we’d all still be at it, or worse, there’d be no BREAK TIME.
When “they” say you should write what you know, know that they mean research and the Internet are your new best friends.
I had no idea what steampunk was when we began collaborating on BREAK TIME. I watched a lot of steampunk movies on Netflix. I studied everyday life. I learned which gadgets were essential for everyday living. I kept it up until one day I announced, “I get it. In fact, I like it.”
Welcome to Break Time, a collaborative steampunk anthology written by seven authors from four countries—USA, New Zealand, Canada, Australia—who have never met.
The year is 1966. Steam still reigns. Oil never became king. Coal is used to heat water to create steam to run engines, and because of it, pollution is a serious problem. The last war was the Great War. World War II never happened. There was no Korean Conflict, and no build up of troops in Vietnam. Despite what might be idealistic times, not everyone is happy.
Alexander Giston, 64 years old in 1966, invented a machine that broke time and allowed him to return to the past and save his wife and son from the train wreck that took their lives. Heeding his advice, they agreed to travel by aeroship instead, and were lost when the aeroship went down. A third attempt failed to keep them from dying.
Al promised himself he wouldn’t again attempt to save his wife and son. Instead he decided to go to the past to kill steam, the means of their death. But some who live and prosper because of steam will do anything to save their way of life, even to kill Al as often as they need to.
Here’s a sneak peek from Dakota David’s section:
Grandfather also saw the wolverine. He looked back at David. “The bear hunts the wolverine. Yet he comes to you to prove that rage can be controlled. He is warning you that your gift has purpose. One day, many years from now, a man will approach you, coveting the suppressed rage of the wolverine’s enemy. This man will be prisoner to the past yet present to the future. It will be your gift that sets him free . . . if you choose to help him.”
Present to the future; what the hell did that mean!
“What if I don’t want to help him, Mushom? What if I can’t?”
Grandfather closed his eyes, lifted his chin to the heavens. The smooth lines in his face softened, and David knew he was speaking to God.
He’s praying for me, Great Spirit. Please listen.
After a time, Grandfather looked back at him. “I don’t know that you will help him. It’s a choice to make then, not now. All future can be changeable, Nosisim.”
It hadn’t been the answer David hoped for and he raised his arms to the sky and called out to the Great Spirit. “Manito! Thank you, but the gift isn’t wanted. Please don’t make me take it. Honour someone else . . . !”
“. . . And that’s my story,” Al Giston said, startling David from his reverie. “Will you help me?”
When David looked at Al, he saw a desperate man, a man who felt justified by his insane request.
Or am I the one who’s insane. I’m talking to a matchitehew from the future.
“You have my deepest sympathies, Al, but I can’t help you.”
AMAZON KINDLE
AMAZON PAPERBACK
And be sure to visit
MS. BUTLER’S BLOG and HER WEBPAGE
Joylene, Métis, has been writing her entire life. She began her first novel in 1983 to honour the passing of her father. Today she and her husband live in the home they built with their own hands on Cluculz Lake. Her first novel Dead Witness was a finalist in the 2012 Global eBook Awards. Her suspense thriller Broken But Not Dead won the 2012 IPPY Silver Medal for Canada West. Joylene is currently applying final touches to two suspense thrillers. Contact her at cluculzwriter at yahoo dot ca