At a Fast Pace or how to keep people reading your story. 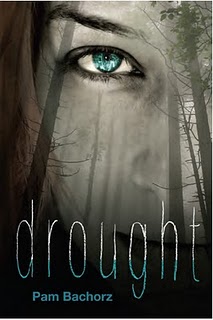 One way to step up the pace is with short sentences in dialogue. Here’s a very short conversation between two of Pam Bachorz’s characters in Drought.

“Does it work?” he asks, glancing at the tree.
Relief, sweet and cold, unties my mouth. He’s not discovered
my blood’s secret, not really.
“It works,” I answer.
“I hate seeing you hurt.” He bends, slightly, and drops the
faintest kiss on the scratch.
“I’ll heal,” I tell him. Gently I slide my arm away. I rub
the spot where he kissed it–it’s still tingling.
“Look. I have an idea,” Ford says. I can smell him: the metal-
lic gtang of sweat, but that clean smell too, the one that makes me
want to bury my face in his shirt.
“This can’t happen,” I tell him.
“Just give me five minutes. Two minutes, even,” he begs.
“Just . . . just one,” I say. He’s so hard for me to resist.
“Run away with me. Please. I can get you far away from here,” Ford says.

This is a great, fast-paced fight scene from Insatiable by Meg Cabot. Check out the way the author uses just very short sentences and a lot of paragraphing to make the scene race to the end.

Lucien’s glance shifted away from his brother and toward her.
And when their gazes me, Meena felt something like an explosive
charge go off inside her head.
She could see in his eyes how much he loved her.
And how hard it was for him not to kill his brother then and there,
with his bare hands, for what Dimitri had done to her.
But he couldn’t. Not yet.

2. A lot of times I find myself overwriting, giving too much information when I want the story to MOVE. I get as much down as I can, and then go back and take out anything that I don’t need.

SLOOOOW SHE GOES:
Starting at the rail station, Hitchcock retraced his steps, head down, searching. The coin had to be along the path he’d traveled from the post office, across the square and down Railroad Avenue. It has only been minutes since he’d discovered his good luck piece missing. He had to find it and he was sure to  if he was careful and thorough.

NOW THIS IS MORE LIKE IT:
Hitchcock, head down, searching retraced his steps. He’d find his good luck piece; he had to.

3. Some scenes just don’t have to be in the story. When you find one that you can let your reader imagine, take it out. That will pick up the pace. 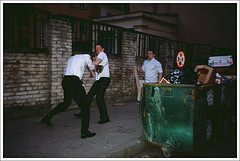 One man stepped into the pool of light that came from a bare bulb next to the alley door.; then another. This one held a knife and circled around him, slicing the air. He backed away, feeling for the bricks so no others could come at him from behind.
“Okay,” Murphy said, wrapping his coat around one arm ready to take them on. “Let’s get this over.”

Charlotte glanced at her watch. Late again, she thought. Why did she stay in this relationship with Murphy Cocoran. If he stood her up one more time . . . .

The missing scene leaves the reader in suspense, wanting to know if Murphy will whip those two thugs and keep his date with Charlotte or not. The fight scene isn’t as important as the increased pace generated by skipping it is. Depending on what you decide about Murphy’s fate, you can fill in whatever details are necessary without showing that scene. 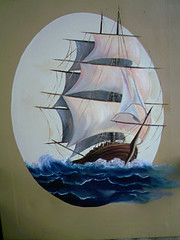 4. Think movies and use what they do to keep the story jetting across the screen.

Let’s say a sailor is about to be Shanghaied. You see him sitting at a seedy bar near the docks, hanging out with some unsavory characters. (Okay, so I’m out of original ideas.) The next scene is him waking up below decks of a ship, on his way to wherever. That’s a jump all right, but one that the audience understands and one that moves the story ahead real fast.

Here’s how it would look in my not so original novel.

Murphy (poor guy) tossed back the last of his pint and swiped his mouth with the back of his hand. “See you, mates,” he said, staggering toward the door.
The three sailors looked at each other, nodded and followed Murphy out.

As always if I’ve left out something or if you think I don’t know what the heck I’m talking about, let me know. This is the last week of my series, What I’ve Learned About Writing. I’m trying to think of another series to start next week. Scratches head and pours wine. Idea are appreciated.