You are here: Home / Uncategorized / In The Throes of Thursday–Why Zombies?

Question: What’s scarier than an a Zombie?

Unfortunately, when there’s one there’s never only two; Zombies come in hoards and you don’t have to go looking for them either. They’ll find you. (Insert scary scream here.)

And people can’t seem to get enough of those ghastly, grim vacant creatures. Why is that?
I guess it’s because we love to be scared.

Vampires used to do that job, but then movies like Love at First Bite came out, and then someone wrote a book about a gentle, lovesick vampire that also happened to be hunk. How can anyone be scared by George Hamilton or Robert Pattinson? Vampires might as well be bunnies now–not the Monte Python type bunny. 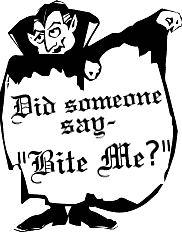 Will timid Maxwell suddenly find his courage and race to rescue Sarah, the girl who makes fun of him, from certain death?

Will Jasper, the hunky star quarterback, run away terrified, leaving his girl friend as the killer hoard approaches?

Will the school’s low-life be the one to devise the plan that saves the auditorium filled with trapped students?

Just look at the tension those questions produce.  I guess writing a book with Zombies is a great idea if you want to reveal the true nature of your characters by putting them into tense and testing situations. However, if you’d rather just write about bunnies, there’s room for that too. Or think outside of the box and be the first to write a Bunny-Zombie sort of book. Oh wait! It may be too late. One’s already been made into a movie.