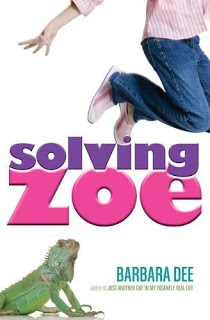 [Want a signed copy of Barbara Dee’s latest novel? Leave your “wittiest ” tween comment and you might just receive one in your mailbox. ]

Barbara Dee is the author of Just Another Day in My Insanely Real Life (McElderry/S&S, 2006, Aladdin MIX, 2007) and Solving Zoe (McElderry/S&S, 2009). Her third novel for tweens, This Is Me From Now On, will be published by Aladdin MIX next spring. A lawyer and an English teacher in previous incarnations, she now lives in Westchester, NY with her husband, three teenagers, and two incredibly spoiled cats. You can visit her on the web at www.BarbaraDeeBooks.com.

Welcome to The Write Game, Barbara. Can you tell us a little about your latest novel, Solving Zoe?

Zoe Bennett feels invisible at school. That is to everyone but the weird new kid, Lucas, who thinks Zoe’s a code-reading genius. She read a single cipher in his notebook, and now he won’t leave her alone. When cryptic, anonymous notes appear in students’ lockers, Zoe becomes a suspect.

Barbara, what triggered the idea for Solving Zoe?

Actually, Solving Zoe was triggered by my first book, Just Another Day in My Insanely Real Life, which was about a middle school girl who turns her chaotic family life into a fantasy novel. As I was writing Just Another Day, I realized how lucky the heroine was, to know that she was a talented writer with a mischievous sense of humor. And then I started thinking: how would it feel if you didn’t know what made you special? Or if you suspected there was something cool about the way your mind worked, but it didn’t seem like the sort of talent kids are supposed to have? I think middle schoolers sometimes have a pretty limited vision of “talent,” so I tried to expand the category a bit.

Hmm, let me think. Okay, here’s a passage. One of the tricks Zoe’s mind plays is to rearrange letters when she’s focusing on a word. As she considers the word Arizona (where someone she knows is visiting) she thinks:

Arizona. Why is that even a word? Arizona. Anozira. Zoriana.
Zoriana is a very cool name. But maybe for a superhero, not for an actual place.

I wouldn’t call these my favorite lines, but I like them—maybe because I’ve always been obsessed with names. When I’m first coming up with a character, I spend hours studying baby-naming books. I waste a ridiculous amount of time this way, but I have to do it!

What’s been the most exciting/daunting part of becoming a published author?

I think the most exciting part is the day you get your first pass galley—when the manuscript you’ve been tweaking on your computer for months and months is mailed to you all printed up, with spiffy chapter headings and fonts, and you suddenly realize that it’s about to become a BOOK. Just last week, I received the galley for my third novel, This Is Me From Now On. It had been sitting in a puddle on my doorstep overnight, so came out of the envelope a soggy clump —but to me it still looked fabulous.

Are you working on a new book? Can you give us a sneak preview?

I just finished my fourth novel for tweens, which I’m tentatively calling Surprise Me. You know how every seventh grade girl is convinced that her own mom is The Most Embarrassing Parent on the Planet? Well, Marigold’s mom really is—she’s a wildly uninhibited performance artist, who one day gives a performance that ends up wrecking the best friendship Marigold ever had. I’m thinking this is basically a mother-daughter novel, but there’s also a lot in it about theater improv, which is a fascinating subject I had so much fun researching.

That sounds like fun. Be sure to let us know when it’s out.

Thanks for the visit, Barbara. I’m off to buy my own copies of your book. For those who want to have some great summer reading fun or have a tween roaming the house asking, “What are we going to do today?” buy Solving Zoe right now and do a problem solving yourself! 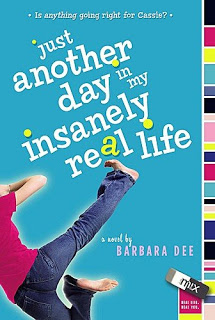 You might want to pick up a copy of Just Another Day while you’re shopping. This tween novel is about a twelve-year-old named Cassie who turns her chaotic family life into a fantasy novel. When she’s convinced her English teacher isn’t actually reading it, she rebels.