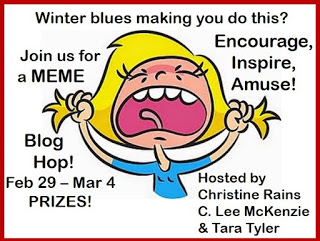 Got the Winter Blahs? We’re here to help. Join us in

Post a MEME during the week (use your own pic or an easy meme maker app) – and if you can’t think of anything, pass on encouraging words from one of your reviews, or an inspiring quote!
Visit others
That’s it!

Then the awesome hostesses will hop around and Ooo and Ahh and choose one entry each to win an ebook. AND two lucky random participants will win a $20 GC. Enter and spread some warmth!

Excerpt from Farewell Painted Ladies
C. Lee McKenzie
When mechanical engineer Paul Hodge unveiled his steamer for its first public test in 1841, it must have been an incredible sight to see. Imagine a fourteen foot long hot metal cylinder, weighing seven tons, snorting and fuming black smoke in front of New York’s City Hall.
That day, as the crowd looked on, the stoker tossed more coal into the fire door and steam pressure in the great iron belly soared. Two men aimed the leather fire hose above the roof of City Hall, and the pumps began their powerful tempo, shooting a stream of water at the rate of ten thousand pounds per minute one hundred and sixty-two feet straight over the cupola. The engine noise buried the onlookers’ gasps.
The Hodge steamer had flaws. Men could not pull its bulk to a fire and, although the designer had intended it would propel itself through the streets by steam, it wasn’t dependable. In any case, the Hodge engine’s arrival presaged change. It performed an effective job of delivering a strong, steady stream of water; required fewer men to operate; and, most importantly, it never tired.
In 1841, the volunteer firemen must have watched from the sidelines, jaws set and arms folded across their chests. They didn’t need to tell each other their thoughts. Their determination to defeat this upstart mechanical freak filled the air as blackly as the engine’s smoke. From then on, these men did whatever they could to make the steamer fail  on the job. They slashed hoses, diverted coal deliveries and stirred dissent between the engine and hand pumper companies at every opportunity. They’d never been above thrashing it out on the streets, and now they turned their energy to defeat a new rival. The volunteers were proud men not given to walking away from a fight, especially this one which, if lost, meant the end to their way of life. 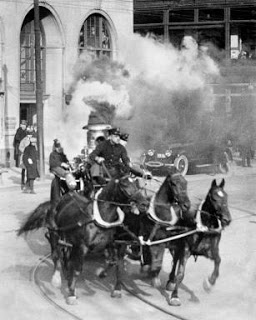 By now you know I was deep into antique fire equipment and their history at one time. I even got teary when I read about the last of the Painted Ladies being mothballed. But change comes and those 1841 steam engine interlopers became dinosaurs not too long after they displaced the hand pumpers.

I still have several articles tucked among my TBDWL (To Be Dealt With Later) file, and pulling these posts together have made me think about actually doing something about those articles.

Have you enjoyed reading about the early fire equipment or was it a bore? Will you join the Meme Hop or are you hopped out?