You are here: Home / Uncategorized / Monday Miscellany–Some Questions About Writing

One thing about being a writer is that you think about words . . .  a lot. You think about what they mean and how they impact you and others. And then there are questions about if the words you choose will convey what you want or if they will have meaning beyond the time you write in.

I loved the post about on Tossing it Out earlier this month. Arlee Bird posed the questions,
“Is your writing mostly in vain? Would you rather make a good living at what you do now and be consigned to the back pages of history?  Or would you prefer the status of struggling artist who gains fame after you are dead and gone?”

In my mind, no writing’s in vain, even when you write in a journal or a diary with no thought of sharing with anyone. What you set onto a page is unique and, therefore, worthwhile. It’s yours and no one else will express the ideas the way you do.  Unless you “copy, word for word” from another writer, an idea that’s similar will be developed differently. Balzac encouraged others to take his ideas and use them. It was his opinion that if writers used his work and incorporated it into their own, he would have another shot at immortality. Now that’s an interesting take on things, and it might bear examination, especially when the accusations of plagiarism come up.

As to the choice of making a living now or being forgotten I don’t think we have much to say about that. We can write for popular consumption today, and what we write will remain the same while the culture and the readers will evolved into something we may never imagine. 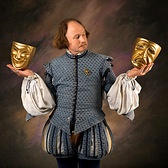 I wonder if Shakespeare considered the long journey his plays and sonnets would make as he wrote them. I believe he would would be surprised at his current status in the world. Elated, yes. But definitely surprised. But let’s face it, he had a way of weaving words together that, even though archaic now and somewhat challenging to understand, pulls at our hearts and makes us flock to those Shakespeare in the Park productions each summer. If we learn anything from his example it is to examine that prose of ours and consider the way it sounds as well as what it conveys. Oh yes, and then there’s the matter of all those universal themes that he wrote about that still tug at our hearts.

So write, write, write and enjoy the act. If you’re lucky, if you’re skilled/talented, if the timing is right you’ll sell your book to readers. If your stars really line up, in a few hundred years you could be a best selling author. Only time will tell. (Oops! Cliche alert.)

Now I’m off to write something. Hope you’ll jump in and add your ideas about Arlee’s questions. Coming this December I’ll be joining Alex Cavanaugh’s Insecure Writer’s Blog Hop. If you want to come on board, just sign up and post about all your insecurity the first Wednesday of each month. See you there, I hope.