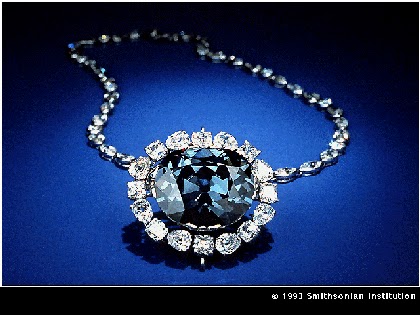 In the legend, a curse befell a large, blue diamond, eventually called the Hope Diamond,  when someone lifted it from an idol in India. From then on anyone who touched that jewel had horrible luck or a horrible death. The stories are interesting, but most likely the Hope Diamond had nothing to do with those tragedies. However, this myth had everything I needed to jump start my Flash Fiction. I’m titling it. . .
THE NEWBIE

“It has been over three hundred years,” Sita shouted. The commotion in the chamber ceased, and her followers humbled themselves before her. “My patience is ended. One week, then I take charge.”
A deathly chill fell over the assembly. They cringed under her glare and didn’t move. Not one person doubted Sita’s power. She conjured curses that reached around the world—a virus in India, a plague in England, a revolution in France—all bringing lives to a sudden and horrible end.
Everyone knew she would wipe them out just as quickly, just as horribly if they didn’t finally restore her jewel.
She stepped down from the dais and the congregation parted. They gave her a wide path and dared not raise their eyes.
The chamber echoed with the heavy thud of the doors closing behind their goddess.
The eldest minister, looking pale, called his Jewel Recovery Committee to him. “My office. Now.”
They huddled over the conference table, hatched schemes, then discarded them.
“Been done.”
“Ineffective.”
“Too dangerous.”
Then a new minister, Shanti, one steeped in magic and benevolence, raised his hand. “I think we should ask them to give it back.”
“Ask?” The ministers inhaled as one.
“Have you tried that?” Shanti asked.
“Never.” They said.
“Then how about, I give it a shot?”
Nobody objected, but a lot of eye-rolling went on.
The young minister caught the next plane to the U.S. When he arrived, he went straight to the Palace of Archives. There he asked for Sita’s jewel. The man in charge said no.
Shanti smiled and held out a tiny, glittery cocoon on his palm. “Give me the jewel, and I will give you something much more valuable.”
The man inspected the object. “What is it?”
“World peace.”
Sita got her jewel back.

Visit some others and have some fun. Happy Halloween.