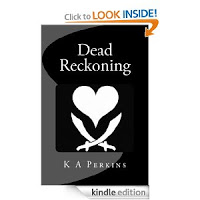 Dead Reckoning by K A Perkins

I stumbled on this one in a forum and decided I’d like to read an historical novel. Here’s my review on Amazon.

Dead Reckoning is an historical adventure of piracy, love and revenge in the Caribbean in the Seventeenth Century.

Leo is born in Spanish Panama in 1659. When he is 12 years old he witnesses the violent rape and murder of his mother by three of the Caribbean’s most feared pirates: Tarr, Blake and Hornigold, and swears revenge at all costs.
Gabriella is trapped in an abusive marriage to a ruthless Dutch slave trader, who is in business with the same English cut-throats. She risks all to escape with her life.

Follow their exciting story as they meet threat and challenge on the Caribbean Seas and pursue their quest of revenge; a quest that leads to a terrifying conclusion. But whose head is in the noose? 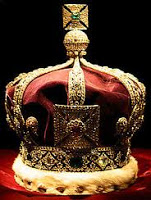 I’m not implying that I know everything about grammar, so I hope none of you are inferring that from Her Grammarness’s posts. However, I do know the difference between an implication and an inference, and it’s nails on that old-fashioned chalk board for me when a writer confuses the two. Here’s the conversation that made this difference so clear in my mind.

“That is one piece of amazing prose,” the agent said, holding her nose.
“Are you implying my prose stinks?” I glowered at her.
“You may infer whatever you please. Just take this elsewhere.” She held my manuscript at arms length between her thumb and forefinger.

Have you discovered some unknown books by accident, read and enjoyed them? Any grammar items that are like nails on the blackboard to you?