You are here: Home / Uncategorized / Those Unnecessary Words 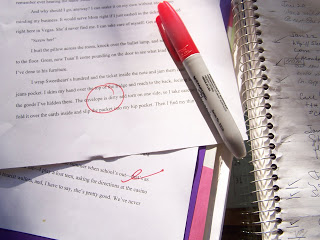 I’ve been totally focused on a major overhaul of a manuscript this past month, and sharing some of that focus on my blog has helped me through the process. I’m winding down, but before I move on I have a couple of final revisions.

First, I’m scouring my 70, 0000 words to see which ones I don’t need. What I’ve discovered while doing this hunt for unnecessary words in the past is this: I usually find a better, more interesting way to phrase something when I discard them. 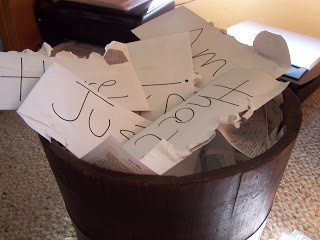 One of the most frequent culprits I like to root out is any form of the BE verb. Of course, you can’t get rid of all your Be verbs, but some you can. Here’s an example of what happened during a revision session.

“By eight the kids were finally in bed.”

“I tucked the kids into bed by eight.”

I liked the word tucked. It was more visual and more active. I felt it helped characterize my protagonist too because tucking conveyed caring, something I wanted the reader to know about this person.

Here are some other examples of what can happen to sentences when you’re able to delete those am, is are, was, were, be, been verbs.

I was so scared, listening to the gunshots coming from outside my apartment door. (Really. Let’s talk about it over at lunch.)

Crouched and shaking behind the sofa, I cupped my hands over my ears to muffle the gunshots coming from outside my apartment door. (OMG!)

There is another of those words that can trot off to the trash, thank you very much, and that’s because where there’s a there, there’s a BE verb on its heels.

Also THAT clauses can really drag down a story, so I reduce them by deleting the head word, THAT. 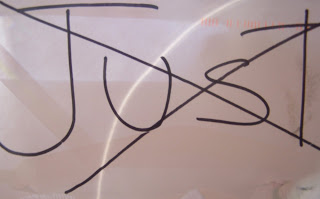 I read a novel not so long ago that just about drove me nuts. Just because things were just supposed to be happening at every turn in the story, didn’t justify (sorry) the use of “just” every other paragraph. I was just so fed up by the second chapter that I just picked up my pen and started crossing out one “just” after another. Since I’ve read that novel, I’ve just edited out “just” every time I use it.

Even is even beginning to annoy me. It’s not quite as irksome as “just,” but just about. I take out a lot of EVENs and after I’ve done that I don’t miss them.

I have a few more words that don’t make the cut, but this post is long enough already. Maybe you have some favorite unnecessary words you’d like to share with us?