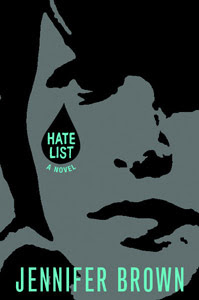 Hey! Today Deb JENNIFER BROWN is here, giving us a glimpse of her book, HATE LIST, released the first of September.

Five months ago, Valerie Leftman’s boyfriend, Nick, opened fire on their school cafeteria. Shot trying to stop him, Valerie inadvertently saves the life of a classmate, but is implicated in the shootings because of the list she helped create. A list of people and things they hated. The list her boyfriend used to pick his targets.

Now, after a summer of seclusion, Val is forced to confront her guilt as she returns to school to complete her senior year. Haunted by the memory of the boyfriend she still loves and navigating rocky relationships with her family, former friends and the girl whose life she saved, Val must come to grips with the tragedy that took place and her role in it, in order to make amends and move on with her life.

Jennifer Brown is the author of HATE LIST, a YA novel coming out in September 2009. As a two-time winner of The Erma Bombeck Global Humor award and weekly columnist for The Kansas City Star, as well as Saturday Featured Blogger for Mom2MomKC.com, Jennifer spends a lot of time dressing up her dog for laughs and thinking of new ways to works words such as “Puh-lease” and “Ch-yeah!” into sentences. Jennifer grew up in the Kansas City, Missouri area, where she still lives with her husband, three kids, and whole herd of uncooperative pets.

It’s really good to have you visit, Jennifer. Readers kind of like to know a little about the authors they read, so here’s some questions to give them a little insider info.

Of all your favorite books, which one do you wish you had written?

The Stephanie Plum series, because they’re just so much fun… and talk about characters who really jump off the page! Ranger! *purrrrr*

What fictional character do you wish you could be?
Cinderella, because no matter how many different ways her story is told… it always ends happily ever after.

After chocolate what do you eat to make the writer-block pain go away?
Cheese

I look forward to reading your book. Readers, be sure to check out Amazon and your favorite Indie for HATE LIST.